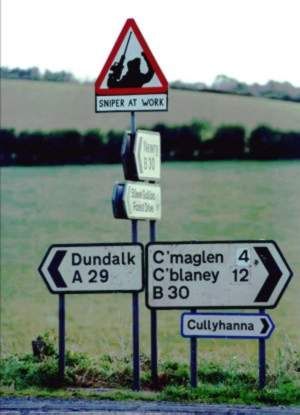 THE Continuity IRA has said it fired a high powered Dragunov sniper rifle, a weapon favoured by the Russian military, at a helicopter in Co Fermanagh.


Using a recognised codeword, the Continuity IRA was responding to a police statement that there was no evidence to verify a claim by the organisation that it fired at least nine rounds at the PSNI helicopter at Wattlebridge, close to the Co Cavan border last Thursday. THE Continuity IRA has said it fired a high powered Dragunov sniper rifle, a weapon favoured by the Russian military, at a helicopter in Co Fermanagh.

The voiceover is laughable, but its hard to disagree with anything this IRA Volunteer says.

The Continuity IRA has regrouped and rearmed​

THE Continuity IRA terror gang in Fermanagh emerged from the shadows as the first dissident republican paramilitary group in the mid-1990s.


While John Joe McCusker has been a senior figure in the group for more than two decades a small number of other dissidents have now joined his ranks, including John Connolly.

Remaining largely dormant for the past decade amid splits and internal disputes, the new gang is concerning police and MI5 chiefs. Security sources estimate it would not have more than a dozen members in Fermanagh, largely based in the Newtownbutler and Rosslea areas.

CIRA has another unit in Lurgan and Craigavon which police believe is also plotting terror attacks. That is the same faction which murdered PSNI officer Stephen Carroll in 2009 and has been behind a number of shootings and bombings in recent years.

The Continuity IRA first came to public attention in July 1996 when it claimed responsibility for a 1,200lb jeep bomb which devastated the Killyhevlin Hotel in Enniskillen.

But its members were also linked to a 1kg semtex bomb discovered outside an Enniskillen furniture store in December 1994, just months after the first Provisional IRA ceasefire.


Between the late 90s and early 2000s it was behind several bombings in Fermanagh, a number of which included semtex taken from Provo arms dumps. Bombings at that time included a rocket attack on a police patrol in Lisnaksea, a landmine in Rosslea, explosions at the River Club nightclub in Enniskillen and a Customs and Excise office.


In 2014 two CIRA members, former Irish soldier Gerard McManus and Kevin Barry Nolan were convicted of terrorist offences after a 2009 attack when a shot was fired at the home of a student police officer in Garrison, Co Fermanagh.


The reformed Fermanagh CIRA's first major attack was in August 2019 when they tried to murder police officers in an explosion at Wattle Bridge, the same area they say they targeted a helicopter in.


A hoax bomb report lured them into the area and while they searched the undergrowth, a secondary device exploded.


The attack was a carbon copy of an earlier murder bid in Craigavon weeks before when an emergency telephone call about a "large bang" drew police to the Tullygally Road, where a second device failed to ignite.


At the time a masked Continuity IRA member told Swedish TV: "We have regrouped, rearmed, we are just going to continue on again."


FBI agent David Rupert, who infiltrated dissident gangs, revealed at the 2003 trial of Real IRA leader Michael McKevitt that the Omagh bombing of 1998 was a joint operation between the Real IRA and Continuity IRA.

Tadhg, I recall you writing on Pish a while back that you respected working class Loyalists who joined paramilitary groups like the UVF, UDA etc. Am I recalling that correctly, or have I gone mad?
Last edited: Jan 25, 2021
OP

Augustine said:
Tadhg, I recall you writing on Pish a while back that you respected working class Loyalists who joined paramilitary groups like the UVF, UDA etc. Am I recalling that correctly, or have I gone mad?
Click to expand...

I can't remember saying that, but I suppose there might have been some context to saying that. The only thing is that those groups just kill ordinary Catholics on information supplied to them by the English occupation forces. So that certainly isn't respectable. Most of their weapons are also supplied by the English military.
Last edited: Jan 25, 2021
You must log in or register to reply here.
Share:
Facebook Twitter Reddit Pinterest Tumblr WhatsApp Email Share Link
Menu
Log in
Register
Install the app
Top Bottom